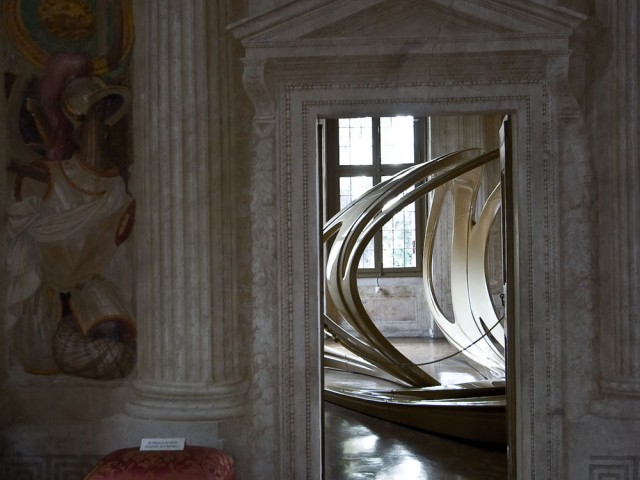 The Villa Foscari La Malcontenta by Andrea Palladio was built during the 1550s, and in a way it represents the transition of Andrea Palladio; the proportion of each room is in fact determined by a specific set of “harmonic“ relations that are derived from the Euclidian mathematics practiced in the 16th century.

In 2008, on the occasion of the 500th anniversary of Palladio’s birth, the internationally acknowledged architect Zaha Hadid was invited to the estate to initiate a dialogue between contemporary architecture and Palladio.

Hadid focused on the rooms of the piano nobile, conscious that exploring the logic and relational system of a single room would have addressed and captured the essence of Palladio’s architectural theory.

The frequency curves generated by the harmonic proportional system of the villa are progressively transformed, through mathematical algorithms, to define a genotypic elementary form that contains in its DNA the whole Palladian set of rules. As a result of this experimentation, multiple complex spatial environments – 2 forms, “Aura L” and “Aura S” – are generated through lawful variations of Palladio’s classical proportions. “Aura L” and “Aura S” are generated as spatial morphologies that reflect the structure of this void, the skeleton of this ethereal space, and presented as two “phenotypes” of the complex order generated by a contemporary translation of Palladio’s harmonic system.