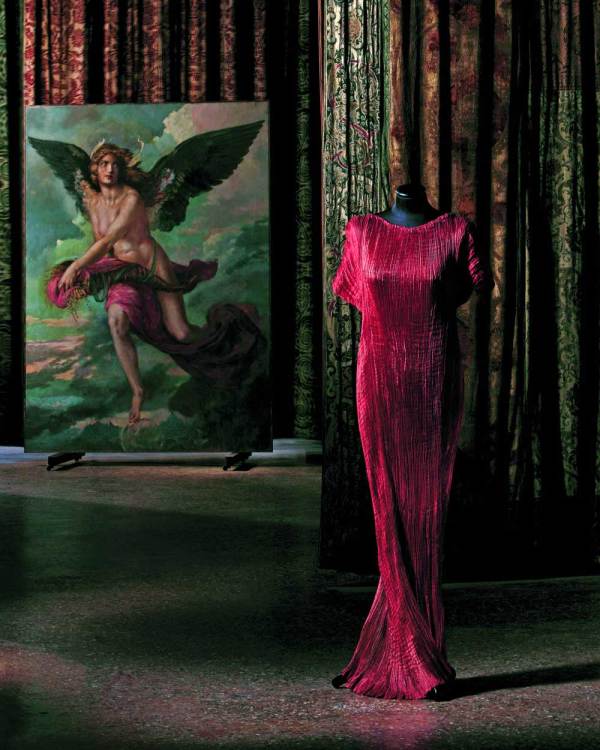 Is there any writer who has written of a designer in more evocative terms than Proust has of Fortuny?  In “In Search of Lost Time”, Madame de Guermantes, the epitome of aristocratic elegance, owns “heaps” of Fortuny gowns, and Marcel’s lover Albertine covets them.

Proust emphasize how Fortuny’s gowns summon reveries of Venice: “Like the theatrical designs of Sert, Bakst and Benois, who at that moment were re-creating in the Russian Ballet the most cherished periods of art with the aids of works of art impregnated with their spirit and yet original, these Fortuny gowns, faithfully antique but markedly original, brought before the eye like a stage décor, and an even greater evocative power since the décor was left to the imagination, that Venice saturated with oriental splendor where they would have been worn and of which they constituted, even more than a relic in the shrine of St. Mark, evocative as they were of the sunlight and the surrounding turbans, the fragmented, mysterious and complementary color”.

On my very first journey to Venice many years ago, I was introduced to this fabulous place in Campo San Beneto – once owned by the Pesaro family – the Gothic Palazzo was from 1886 transformed by Fortuny into his own atelier.

The building still retains the rooms and structures created by Fortuny, and one can find the working environment of Mariano Fortuny (y Madrazo) represented and reflected through precious wall-hangings, paintings, photos, models for theatre stage-and light design, grand garments and the famous lamps – all objects that testify to the artist’s inspiration and still give count of his eclectic work and of his presence on the intellectual and artistic scene at the turn of the 19th century.

I have since then been devoted to this Venetian textile magician with multiple talents and paradoxical nature. Fortuny did not want to be defined by one thing. As a boy, he copied the paintings of Tiepolo, Carpaccio and others, but inevitably he was drawn to textile design and fashion, as well as to advances in lighting and photography. Fortuny was among the very first designers to propose a loose, body-skimming silhouette free of corsets – the Delphos gown was a finely pleated silk dress first created in 1907 inspired by the classical Greek Charioteer of Delphi.

Fortuny and Wagner -Wagnerism in the visual arts in Italy